The 2018 Syrah has a deep garnet colour and a flatering floral nose, violettes and black fruit.Fruity and easy to drink with velvety tannins and a pronounced taste of blackcurrant. Ideal for aperitif or cheese and charcuterie board, to be opened a bit before drinking and serve at around 18°c 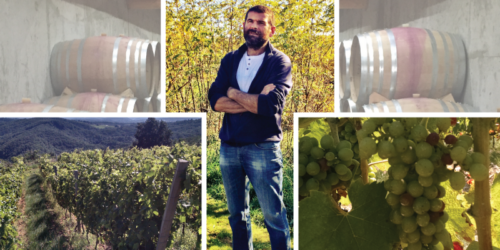 In 1999 he acquired his vineyards in Saint-Joseph and Condrieu near the town of Limony and began by selling his wine to the local cooperative. It wasn’t until 2010 that he finally started bottling wine under his own name from his own 8 hectares, which says a lot about Nicolas. He is not one to rush anything; instead, he is a steadfast perfectionist who prefers to take his time and do things the right way. He has been certified organic since the very beginning and is now in the process of carefully working biodynamics into his vineyards, with the intent of making the finest wines possible from his terroir. His labels feature a reproduction of the Roman coins from 75 BC that were found in the Intuition vineyard (along with other artifacts) during planting, evidence of the incredible history of this his vineyards.Nicolas likes to explain that his wine-making is not formulaic: he adapts it to the conditions of the vintage. The idea, in the end, is to make wines that are terroir and finesse-driven, pure, precise, clean and transparent. The wines are meant to be structured but also easy to drink. We tend to agree, as Nicolas’ wines are captivating upon release, yet will undoubtedly reward the patience of those who add a case to their cellars.