In 1979, Bernard and Cécile Croisille moved to Fages, located in the countryside surrounding the tiny town of Luzech. Their sole wealth was their youthful exuberance, a passion for working the land and a dream of building a life around this passion. They decided to become tenant farmers of a parcel of land that had been left untouched for years. With much perseverance and dedication the couple brought life back to the land. The first few years were difficult – all of their labor and capital were invested in clearing, preparing, planting and maintaining the first 7 hectares (approximately 17 acres) of vines. They patiently awaited the first harvest, as the fruits of their labor were not to come to fruition for several years. Finally in 1984, their first yield was brought to the Parnac winemaking cooperative.

Bernard and Cécile remained passionate about performing the job at hand to the best of their ability. As visionary, driven individuals, they worked continuously to improve their technical expertise. Beginning from zero, they meticulously dedicated themselves to enhancing their cultivating skills and constantly questioned their work in order to propel their vineyard to success. After ten years of working with the winemaking cooperative, their drive pushed them to part ways and undertake the vinification process independently. This marked the beginning of the following ten-year chapter, during which they discovered and experimented with different winemaking and aging techniques. During this period they worked in association with a neighbouring winemaker and made use of his atelier to complete the vinification process of their superb harvests. Towards the end of the 2000s they ended this association and purchased an old viticulture estate, which they restored themselves and installed their workshop in their newly renovated chai.

Business took on a new evolution in 2008 when their second son, Germain, officially joined the team. The vineyard expanded and started transitioning toward organic viticulture in 2010. In 2012, Germain’s childhood friend, Nicolas, began working with the Croisilles. Followed by Simon, the youngest of the band of brothers, who joined the team in 2015.

Over the course of their history, the Croisilles observed, evolved and partook in various enriching collaborations. This open-mindedness combined with their belief that all acquired knowledge must be placed under examination led to the transitioning toward organic viticulture in 2010. A mindful winemaker utilizes agricultural techniques that respect and care for the soil, plants and the environment in which he lives. The Croisilles found truth in these principles and thus the decision to convert to organic viticulture came naturally.

Organic agriculture follows a growing method that does not use synthetic chemicals or genetically modified organisms. The aim of organic agriculture is to consider one’s production methods as an ongoing holistic process, favoring natural cycles and biodiversity in order to bring life and vigor back to the soil – a crucial element, which all too often is neglected by farmers.

The French term terroir is defined as a global consideration of the soil and environmental conditions affecting and contributing to the unique characteristics of a specific area and in turn to the crops grown there. Château Les Croisille’s ambition is to let this reanimated soil and the terroir express themselves in their wines. By converting to organic viticulture, the terroir is reflected in a natural, untainted manner. 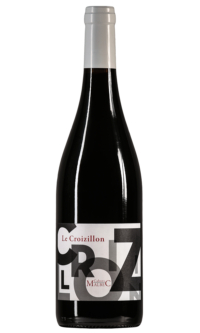